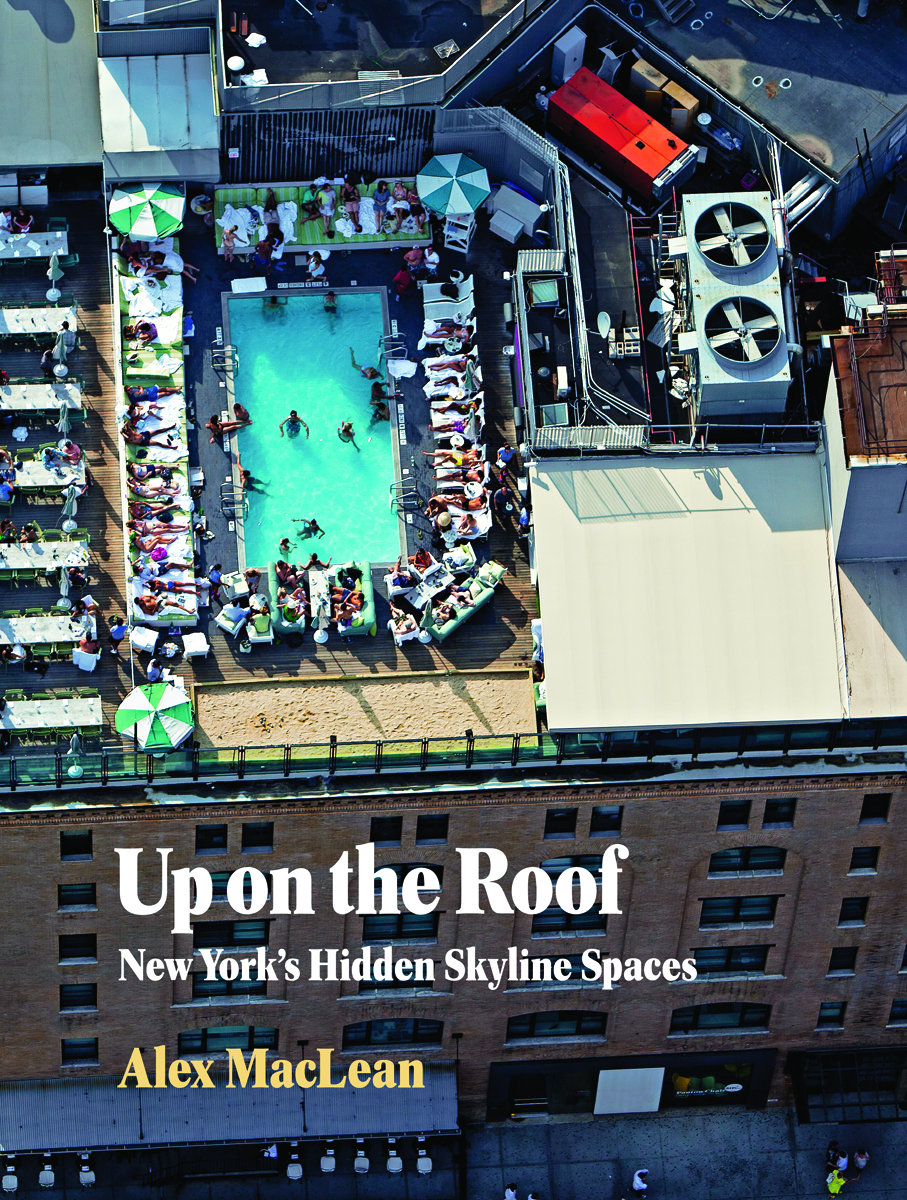 Put the American photographer Alex MacLean (1947) in a small airplane with his camera and you know that only marvelous images can be the result. Whether it be landscapes, cities or natural phenomenons, Maclean seems to capture them all with ease. Time and time again he finds that subject which appeals to him and knows how to portray this in his megalomanic fashion. Next to primarily American landscape he focused specifically on just a city before: with Las Vegas and Venice.

For his latest release Up on the Roof he again decided to take it from a higher viewpoint, but exchanged his aircraft for a helicopter. Probably worked a lot easier when swirling above the Big Apple, because he focussed all his attention on the roofs of the building in New York. Apartments, companies and skyscrapers; no building was to high for MacLean to not see what was happening on top of it. A roof terrace has always been a luxury in this ever busy city, one of which only the happy few can dream. For the normal New Yorker therefore always raises the question: ‘What’s up there?’ MacLean give us in his latest release an answer to this question, because even though the gates at street level remained closed for him as well he was unstoppable from the sky.

In total he captured 183 roof terraces, some of which were transformed to lush gardens (like the miniature forest of singer Bette Midler’s huge apartment in the Upper East Side), personal training facilities or even landing strips, like at 77 Water Street, where a model of a British fighter plane from the First World War can be found. Unimaginable that on top of most of these building, next to the famous water tanks, playgrounds, of course a lot of pools and even messages for extraterrestrial life have been created. A world on top of another. All of this makes the book full of surprises, almost like a revelation.

While most inhabitants didn’t seem to be hime when MacLean passed over their private Garden of Eden’s – or simply didn’t care he was intruding on their privacy from this unorthodox position – other wave at him or hold up their beer. Let there be no doubt about the fact that the roof terraces of New York are actually just as busy as the street many levels below. Some of the building are highlighted, while the photographer in Chelsea captured whole blocks at ones. This way we also get a good overview of how these roofs are being used, which form an astonishing one third of unreachable spaces in Manhattan. Next to that Up on the Roof gives us a good image of the geometric city planning for which New York is so famous. Of all the images MacLean makes notice of the location in the book as well, so when you visit the city that never sleeps next time you can try to find them all. From the street that is.

This entry was posted in Book reviews, Photography and tagged Alex MacLean, Up on the Roof. Bookmark the permalink.