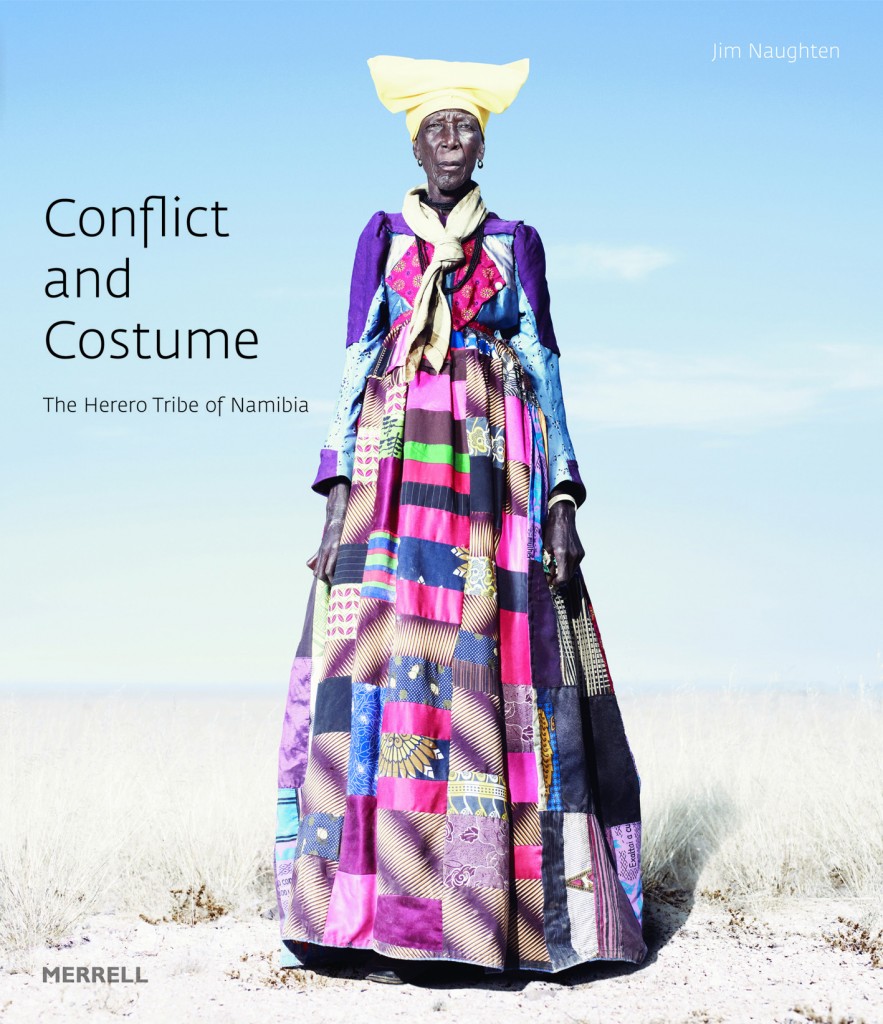 It couldn’t have been an easy trip for Jim Naughten (1969), traveling thousands of kilometers through the Namibian desert and constantly having to clean his camera from all the dust and sand. Still, it was the only way to meet and portray as many members of the Herero tribe in the South African country. He needed to tell them what he was planning on doing and that took a lot of preparation, effort and perseverance. The British photographers wanted to capture the tribe members in their flamboyant and colored costumes, which however stem from a troubled past.

‘In the European scramble to colonise Africa, Kaiser Wilhelm’s Germany claimed one of the least populated and most hostile environments on the planet. It became Deutsche Sudewest- afrika. Though sparsely populated, it was already home to the San, Nama and Herero people. Rhenish missionaries set about converting and clothing them after European fashion. Over time, this became a Herero tradition, and continuing to dress in this manner was a great source of pride to the wearer’, Naughten explains on his foreword. War broke out between German colonizers and the local tribes in 1904. The Herero tribe was devastated, having lost almost eighty percent of its population. Garments became an important expression of identity during these fragile times. Upon killing a German soldier, a Herero warrior would remove the uniform and adopt it to his personal dress as a symbol of his prowess in battle. Paradoxically, as with the Victorian dresses, the wearing of German uniforms became a tradition that is continued to this day by Namibian men who honour their warrior ancestors during ceremonies, festivals and funerals.’

In four months Naughten produced his broad work for Conflict and Costume, The Herero Tribe of Namibia with the searing heat of the intens Namibian desert as backdrop for marvelous portraits of it’s proud inhabitants. Fully dressed up. Meaning men in paramilitairy uniforms or all suited up, woman in exuberant dresses in Victorian style, all with a hint of Africa and powerful, full of self confidence captured. When you realise that some of these gears take up to ten meters of fabric and the temperature reaches fifty degress Celsius, you understand that posing must have been quite a challenge.

Naughten got invited to weddings, funerals and other ceremonies which proved the perfect occasions to catch the decked Herero’s and portray them in the magnificant Namibian landscape. Some appear suddenly and just fitted perfectly in the light settings, while for others extensive negotiation with the village elders was required.

‘These portraits are not intended to serve as a conventional documentary of Herero culture’, he explains on his website. ‘They do not capture the subject in a snapshot of everyday life nor with objects typical of routine or social station. Subjects are removed from their home and intentionally suspended in a confrontational posture. As such, their identity as Herero tribe members is reified in their garments and their gaze, a colour and vibrancy brought into acute focus by the contrasting setting.’

Respect, honour and pride are therefore important aspects of his work and everything in Conflict and Costume represents that. The low view point is one of the things that make that visible. Fifteen years ago – back then on a motorcycle – Naughten traveled through the country and got fascinated with the clothing style of the Herero’s. Now there is this phenomenal book with monumental images. Luckily, finally.

This entry was posted in Book reviews, Photography and tagged Conflict and Costume, Jim Naughten, Merrell, The Herero Tribe of Namibia. Bookmark the permalink.